David Coffey wrote a post about teachers giving students problems that they themselves don’t know the answers to–doing this deliberately, as a pedagogical strategy.  I’d like to share an example from my own classroom, as well as some reasons why I’ve pursued this path.

Before I begin, allow me to say that what follows is a “sometimes” occurrence in my classes.  Most times when I share open-ended explorations with my students, I’ve already investigated the problem pretty thoroughly–either with a previous class, or on my own in preparation.  And of course, there are plenty of times when my classes are more closed-ended.  But on a few occasions I’ve purposefully held myself back from thinking about a problem before sharing it with students.

I think the first time I did this with serious malice and forethought–teaching in the first degree–was at the beginning of last year with my sixth and seventh graders.  In addition to beginning our diagnostic and review work with arithmetical topics, I gave out this first sheet of problems that were inspired by / stolen from James Tanton’s Math Without Words:

Not a free-form task–plenty of specificity here–but at the same time, no instructions.  I hadn’t done these problems before I handed them out.  What I mean is that I had played around with them a little, but hadn’t convinced myself that any were impossible, and certainly didn’t have any kind of general theory.  I recognized that there was some mathematical depth here and felt that there were likely many connections and extensions to be made.  I wanted to open the year by modeling problem definition, problem creation, and problem solving in a live, off-the-cuff way, and this starting problem seemed like a great way to do it.

The kids dove in–faster, slower, with frustration and accomplishment and bits of insight.  The variations they composed on the back were fabulous–different sized grids, different shaped grids, obstacles, fixed end points, three-dimensional versions, and on and on.  They shared these with each other and critiqued each other’s work, and we discussed the gradations of variation that had sprung up in these new problems.

Here’s what came next: 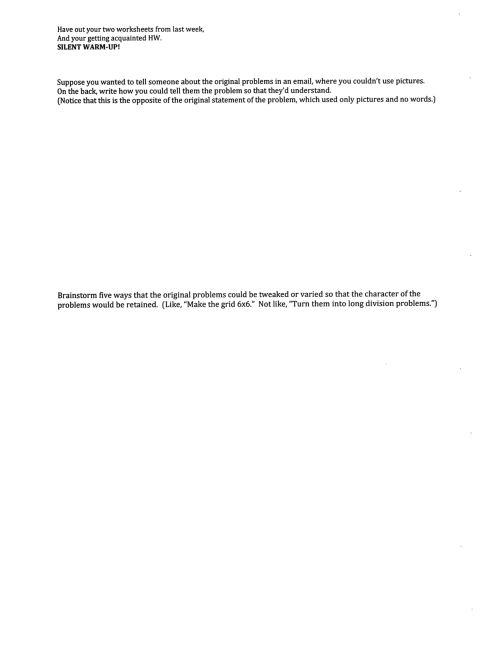 Here I was pushing for clear language and problem definition, as well as another go-round at creating variations to the original problem.

For the next assignment, I asked my students to explore the nearby space of the original problem–looking for insight into it by looking at variations, and especially at simpler variations.  That’s a problem-solving strategy that worth of the name.  I gave them graph paper and asked them to try out this kind of grid-path problem on some smaller and perhaps bigger boards.  I did the same.

That was actually a homework assignment.  When they came back in, I had them get into small groups to share and compile their findings:

What they uncovered was really awesome and–as best as I can remember–a surprise to me!  On the even boards, it seemed like the problem was possible no matter when the starting dot was located.  The odd boards, on the other hand, had a very suggestive checkerboard pattern.  Conjectures and excitement filled the room.

The following came next–I don’t know if the idea came from me or from a kid: 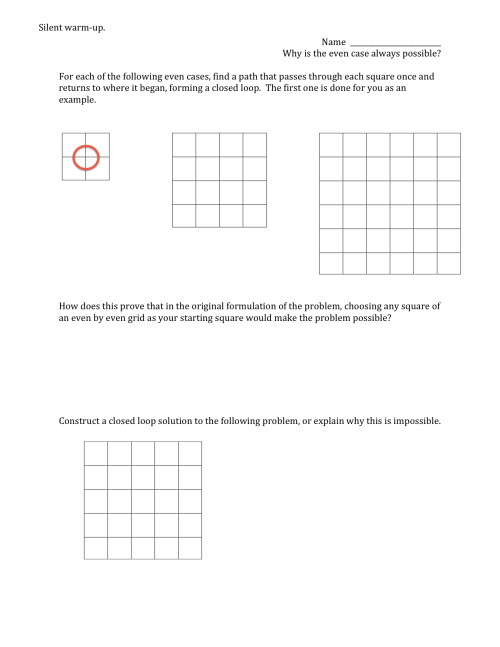 I won’t spell out the gory details, but there’s so much here–parity, induction, tiling, Hamiltonian circuits.  And I didn’t know it was all there when we started, except in my gut.  So much depends on having a stock of such problems.  Finding them is both hard and easy.  Maybe I’ll talk about that some other time.

At this point last year, some kids went on to explore their own variations during free-choice time.  (Geofix polyhedra laced with string, anyone?)  There were probably loose ends that never got resolved, but that’s not important.  What is important is that having this open-ended, let’s-figure-it-out-together exploration at the start of the year really helped to set the tone that I was hoping for.  So here’s to say that posing problems that you don’t know the answer to is entirely possible and potentially extraordinarily fruitful.  It can happen in large or small doses, but it belongs in the hands of every kid–not just the ones who are “good at math” in conventional ways.  Everyone needs the experience of a math classroom where there are no “haves” and “have-nots”–the teacher included.

Right now I’m in the midst of doing something similar with my fifth grade classes.  We’re working to figure out how many different combinations of pattern blocks can fit together to make a full turn at a point.  I have no idea of what the answer is, or what patterns will crop up.  I’ll let you know when we figure it out!

I hope you find something worth chewing on in the above.  Wow–it feels so great to finally share some math!

PS  With respect to all of this business about problem creation and variations, extensions, and generalizations, let me say that I owe so much Avery Pickford.  I had the great fortune of cutting my teeth on this crazy profession while sitting next to Avery in our math department office at Saint Ann’s.  Louder voices than mine have sung his praises, but I know firsthand how thoughtful and awesome he is.  Just a for-instance: check out this sweet description of the problem cycle and variations, extensions, and generalizations that he wrote and I tweaked.  For this and so much–thank you, Avery!