Dan Meyer has posed some questions in a recent post about the merits and potential of the following problem:

Given an arbitrary point P on a line segment AB, let AP form the perimeter of a square and PB form the circumference of a circle. Find P such that the area of the square and circle are equal.

What can you do with this? How can you improve the task?

Here are the thoughts I had (comment-turned-post) and an attempt at reworking the task.

Experiences with problems often become more powerful when they’re not just one-offs—when they’re surrounded by some kind of context. One kind of context that I find fruitful is the notion of a problem space. Most of the interesting aspects of the circle-square problem that Dan highlighted—like “assigning a variable” and “constructing a model” and “using operations on it”—aren’t specific to the geometric figures of circle and square. They equally well apply to similar questions (some easier and some harder) involving many different kinds of shapes. The circle-square combo does have a nice “classic” feel to it, but if we care most about the mathematical practices and methods involved in solving it, then we might do well to also explore variations on it.

In addition, the circle-square task as it stands puts the bar at one specific level of difficulty and requires certain algebraic and geometric skills to be firmly in place for a successful solution—and really even to make any significant headway. Whenever possibly I prefer to lower the threshold for success in a task while also raising the ceiling—an easy way to let students self-differentiate a task.

Here’s a first shot at a warm-up worksheet to introduce the problem space: 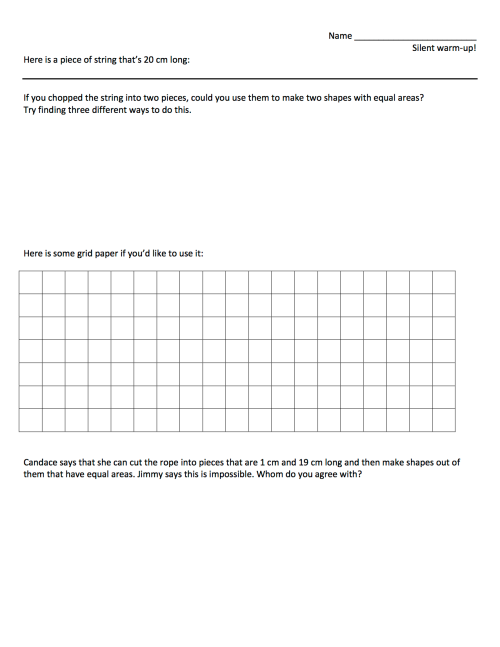 I might have string and scissors on hand for students who were interested in using them, but my sense is that the problems as I’ve stated it—and the solution methods students are likely to take—is sufficiently concrete to make manipulatives perhaps useful and fun, but not necessary.

What would happen after student had a chance to work on this sheet on their own for a bit? Well, they’d have time to share what they came up with in pairs or small groups. Then we’d do some sharing as a whole class and discuss solutions and conjectures. That’s another thing—there are so many equally and perhaps even more interesting mathematical questions that can arise in this particular problem-space than the circle-square one that we’re (likely) headed to and that prompted this whole adventure. I’m sure the directions that students would take this in and the questions and problems they would pose would be fascinating and worth pursuing. They’d also likely provide richer and more powerful mathematical experiences than the circle-square problem on its own would, and solving this problem would carry a new significance in light of the other problems that had been posed and solved prior to it.

Those are my thoughts so far. What do you make of them?

This entry was posted in Uncategorized. Bookmark the permalink.